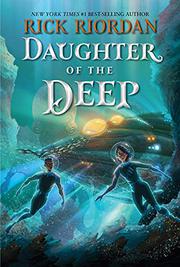 DAUGHTER OF THE DEEP

A teenager faces seemingly insurmountable challenges in this riveting modern-day spinoff of Twenty Thousand Leagues Under the Sea.

For Ana Dakkar and her fellow ninth graders at Harding-Pencroft Academy, there is nothing more momentous than the weekend trials each student must ace at the end of freshman year. Students who fail to showcase their survival skills are asked to leave the academy, a heavily guarded place Ana has thought of as home since the mysterious deaths of her parents. Though Ana’s brother, Dev, is a senior, what happens at trials is such a closely guarded secret that no one in her year knows what to expect. While her group is out on the water for their trials, Harding-Pencroft is demolished in an attack orchestrated by a rival school. As Ana and her classmates discover that the events depicted in Jules Verne’s classic novels were real, Riordan’s lifelong love of the source material is clear—especially when Ana learns information that will help her find a way to protect the group. A foreword by Roshani Chokshi introduces this adventure that is both great entertainment and centers a well-developed protagonist who is thoughtfully shown dealing with loss. Ana is of Bundeli Indian descent, and her group of peers, who are diverse in various ways, experience losses and struggles of their own. (Final illustrations not seen.)

A riveting novel that will have readers rooting for its star.