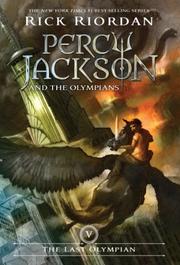 From the Percy Jackson and the Olympians series, volume 5

In the fifth and final installment of the Percy Jackson and the Olympians series, Percy is turning 16, when it has been prophesied he'll make a choice affecting the fate of Western civilization. It takes 100 pages to set all of the players in place, but every detail proves essential to the playing out of the grand battle between the Titans and the Olympian gods. Morpheus has put New York City to sleep, preparing for the invasion of Kronos, Typhon and their army of monsters. Standing between them and their destination of Olympus, now at the top of the Empire State Building, are Percy, Annabeth, their demigod pals from Camp Half-Blood, the gods of Olympus and an assortment of other demigods and minor gods. Riordan masterfully orchestrates the huge cast of characters and manages a coherent, powerful tale at once exciting, philosophical and tear-jerking. The bestselling series's legions of fans will cheer their heroes on and rejoice in such a compelling conclusion to the saga. (Fiction. 9 & up)