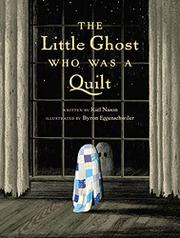 THE LITTLE GHOST WHO WAS A QUILT

A ghost learns to appreciate his differences.

The little ghost protagonist of this title is unusual. He’s a quilt, not a lightweight sheet like his parents and friends. He dislikes being different despite his mom’s reassurance that his ancestors also had unconventional appearances. Halloween makes the little ghost happy, though. He decides to watch trick-or-treaters by draping over a porch chair—but lands on a porch rail instead. A mom accompanying her daughter picks him up, wraps him around her chilly daughter, and brings him home with them! The family likes his looks and comforting warmth, and the little ghost immediately feels better about himself. As soon as he’s able to, he flies out through the chimney and muses happily that this adventure happened only due to his being a quilt. This odd but gently told story conveys the importance of self-respect and acceptance of one’s uniqueness. The delivery of this positive message has something of a heavy-handed feel and is rushed besides. It also isn’t entirely logical: The protagonist could have been a different type of covering; a blanket, for instance, might have enjoyed an identical experience. The soft, pleasing illustrations’ palette of tans, grays, white, black, some touches of color, and, occasionally, white text against black backgrounds suggest isolation, such as the ghost feels about himself. Most humans, including the trick-or-treating mom and daughter, have beige skin. (This book was reviewed digitally with 11-by-16.6-inch double-page spreads viewed at 66.2% of actual size.)

Halloween is used merely as a backdrop; better holiday titles for young readers are available.