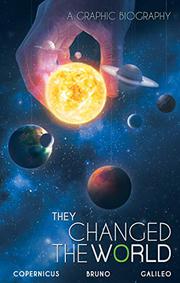 THEY CHANGED THE WORLD

Veteran graphic novelist Hoskin (The Taj Mahal, 2019, etc.) turns to the history of astronomy and the fight for heliocentrism.

Humans have been stargazers for as long as we know, and contributions to the science of astronomy have come from cultures all over the world. Here, Hoskin and illustrator Kumar (Hamlet, 2019, etc.) use the graphic-novel format to present a pivotal point in the history of science. Through the 1500s and 1600s, amid the Reformation and dawning of Enlightenment in Europe, astronomers Copernicus, Bruno, and Galileo used advances in data and mathematics to make a case against the long-held view that the Earth is the center of the universe, around which all else rotates. While stories of the three astronomers whose work at times ran afoul of the Catholic Church are presented, the work of other relevant and notable scientists is completely left out, including the early heliocentrist Aristarchus, while others, like Kepler, receive only a passing mention. It is clear the author is presenting a case of science versus the church more than a full history of how a sun-centered universe (and later solar system) came to be accepted. This along with other errant or confusing statements makes for uneven reading. Backmatter presents information about how the planets got their names as well as the history of the Indian space program and notable Indian scientists.