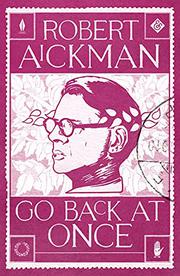 GO BACK AT ONCE

A 1975 comedy of manners and imperialism, never before published in the U.S., by a British cult novelist.

Set in England in the wake of the First World War, Aickman’s satirical novel follows Cressida Hazeborough and her wealthier friend Vivien as they leave school and set out to find purpose in life. They decide to move in with Vivien’s scandalously divorced Aunt Agnes and, for a time, pursue jobs as a saleswoman and receptionist. Soon, however, they become fascinated with the Italian “patriot,” quasi-fascist, and publicity magnet Virgilio Vittore, whom Vivien dreamily describes as “a great poet, and a great playwright, and a great athlete, and a great soldier, and a great leader, and a great aviator, and a great lover.” Fantasy quickly becomes reality, however, when Aunt Agnes reveals that she shares a romantic past with Vittore and invites the young women to join her on a trip to assist him in Trino, a bit of Italy he’s established as his own state. Once there, the novel takes a surreal left turn, foregoing traditional plot almost entirely in favor of erotic fantasy and imperial satire. The publication of this novel offers readers the opportunity to delve into a witty, sophisticated work of 20th-century British fiction. Though its lack of plot and inchoate second half might befuddle some readers, aficionados of writers like Evelyn Waugh will be delighted by this unearthed treat. Aickman can sometimes leer at his young female protagonists, but more often he observes them with dry and generous humor: “When it comes to the opposite sex,” Vivien tells Cressida, “I am interested only in a Man, and neither you nor I have ever met one.” By the end of the book, they’re still searching.

An imperfect but entertaining work of British satire.