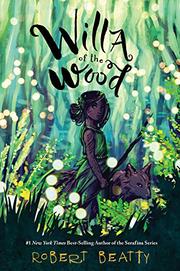 WILLA OF THE WOOD

From the Willa of the Wood series, volume 1

The old sourwood trees, the rushing streams and rivers, and the great mountain are home to 12-year-old Willa.

She and her mamaw live in Dead Hollow with hundreds of her dwindling Faeran clan. Ruled over by their fearsome leader and god, the padaran, the Faeran are a woodland race who once numbered in the thousands, living on the Smoky Mountain as stewards of the forest. Under the rule of the padaran, the old ways of speaking to animals and plants, foraging and caretaking, and using the old language are forbidden. Instead, Faeran children are forced to speak Eng-lish and drafted into his fearsome army of trained hunter-thieves called jaetters, who must steal from the day-folk, or white homesteaders. One night, Willa breaks into a homesteader’s cabin and is badly wounded. When the human man sees that she’s so gravely hurt, he tries to help—to her shock. Willa flees to Dead Hollow, where she is shocked to discover a young Cherokee boy along with many other human children imprisoned. As she sets out to unravel this mystery, she grows to understand the power of individual choice and of standing up for what’s right. Beatty writes a close third-person narration from Willa’s perspective, allowing readers to see the various humans she encounters through her eyes: the Cherokee the Faeran predated but live peacefully alongside; the day-folk the jaetters steal from; and the loggers and developers who do violence to them all—and with whom the padaran has more in common than he should.

A moving, atmospheric journey of hope.