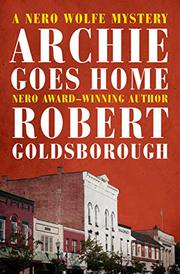 In Archie Goodwin's 15th adventure since the death of his creator, Rex Stout, his gossipy Aunt Edna Wainwright lures him from 34th Street to his carefully unnamed hometown in Ohio to investigate the death of a well-hated bank president.

Tom Blankenship, the local police chief, thinks there’s no case since Logan Mulgrew shot himself. But Archie’s mother, Marjorie Goodwin, and Aunt Edna know lots of people with reason to have killed him. Mulgrew drove rival banker Charles Purcell out of business, forcing Purcell to get work as an auto mechanic, and foreclosed on dairy farmer Harold Mapes’ spread. Lester Newman is convinced that Mulgrew murdered his ailing wife, Lester’s sister, so that he could romance her nurse, Carrie Yeager. And Donna Newman, Lester’s granddaughter, might have had an eye on her great-uncle’s substantial estate. Nor is Archie limited to mulling over his relatives’ gossip, for Trumpet reporter Verna Kay Padgett, whose apartment window was shot out the night her column raised questions about the alleged suicide, is perfectly willing to publish a floridly actionable summary of the leading suspects that delights her editor, shocks Archie, and infuriates everyone else. The one person missing is Archie’s boss, Nero Wolfe (Death of an Art Collector, 2019, etc.), and fans will breathe a sigh of relief when he appears at Marjorie’s door, debriefs Archie, notices a telltale clue, prepares dinner for everyone, sleeps on his discovery, and arranges a meeting of all parties in Marjorie’s living room in which he names the killer.

The parts with Nero Wolfe, the only character Goldsborough brings to life, are almost worth waiting for.