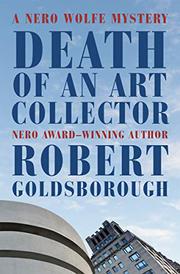 DEATH OF AN ART COLLECTOR

Everyone in Manhattan’s art world, from Frank Lloyd Wright on down, seems to be pressing Nero Wolfe to determine whether a wealthy collector fell or was pushed out of his office window.

A dinner to preview the 1959 opening of the Guggenheim Museum for its upper-crust patrons introduces Archie Goodwin, who’s accompanying his philanthropist girlfriend, Lily Rowan, to the soon-to-be-deceased Arthur Wordell, the father of Lily’s friend Nadia, and most of the intimates who seem fated to rub him the wrong way: biographer Faith Richmond, Art & Artists publisher Emory Sterling, curator at large Henry Banks, fine arts professor Boyd Tatum, abstract expressionist painter Zondra Zagreb, and Roger Mason, mopey curator of the Wordell collection. The only suspect missing from the group is Alexis Evans Farrell Wordell, the long-estranged wife who’s evidently hoping her refusal to divorce the collector will put her first in line if he dies intestate, as he obligingly does by tumbling 20 stories from the nondescript midtown office window in which he’s wont to perch to the parking lot below. Nadia, who’s convinced her father’s death was neither accident nor suicide, importunes Wolfe (The Battered Badge, 2018, etc.) to investigate. So does Alexis, who makes no secret of the fact that she thinks Nadia is responsible. And so does Wright, famed architect of the Guggenheim, who thinks Wolfe owes it to the city to take the case without a fee. Remarkably, Wright’s visit to Wolfe’s brownstone is no more remarkable than any of the other visits he gets from suspects, some at their insistence, some at his. No clues emerge from their conversations; no one in particular is implicated; and everyone sounds so much like everyone else that you may forget who’s sitting in the red leather chair this time. When it’s time for the big reveal, Wolfe summons all interested parties, tosses out some vague remarks that could implicate anyone, and enjoys the dubious satisfaction of seeing the killer snap like a week-old breadstick. As if.

If it weren’t for the proper names and historical references, fans would never know they were reading a continuation of one of the 20th century’s great detective franchises.