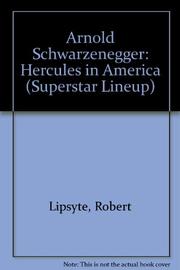 A hard look at the youth and career (up to Terminator 2) of ``the most famous real strong man in history.'' Lipsyte draws connections between the contempt with which young Arnold was treated by his father and the ruthless, bullying competitor he grew to be: fear of being thought weak has fueled his determination to win at any cost. His success has been spectacular, both in bodybuilding (which he almost single-handedly invested with a new, macho popularity) and in films—the author compares him to Elvis and Muhammad Ali as someone who has boosted himself to the status of cultural icon. Lipsyte closes with a discussion of the conservative politics of ``Conan the Republican'' and his marriage into the American aristocracy. A revealing, fluidly written picture of a charming, manipulative, driven man. Lipsyte's new Jim Thorpe (ISBN: 0-06-022988-8; PLB: 0-06-022989-6) is another unconventional biography in the SuperStars Lineup series. No index or bibliography; profusely illustrated with b&w photos (not seen). (Biography. 11-13)