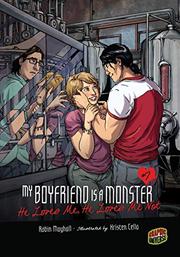 From the My Boyfriend Is a Monster series, volume 7

This weak entry in a generally well-founded series puts a high schooler between two hunky guys who turn out to be the same hunky guy.

Hardly has Serena started at her new school in a small Texas town than she hooks up with hulking star quarterback Lance. She also agrees to become a study partner with mostly home-schooled, equally outsized Cameron—on an assignment analyzing (hint, hint) Dr. Jekyll and Mr. Hyde. Soon, she notices that the two are never seen together and, as time goes on, that Lance shuttles between sweet talk and an ugly temper that turns violent at any mention of Cam’s name. The teens in Cella’s black-and-white panels are engagingly distinct of look and personality, but Mayhall takes so long to set up the background and introduce the characters that the actual melodrama, revelations, climactic face-off and tidy resolution are crammed into the last 35 pages. Some chemistry (of the romantic sort), but the suspense is contrived and perfunctory. (Graphic paranormal romance. 12-14)