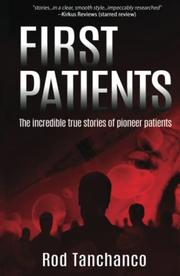 A physician and medical journalist describe 10 clinical cases that helped to revolutionize medicine.

Tanchanco found an early inspiration for this book in a story he’d read about a heart failure patient whose life was saved by the 1958 invention of an implantable pacemaker rudimentarily molded from a can of shoe polish. The author then sought out other accounts of patients whose cases had spurred breakthrough therapies, treatments, and lifesaving devices and essentially become medical game-changers. He begins with Benjamin Jesty, an English farmer who controversially experimented with introducing the cowpox virus into human tissue in the late 1770s, hoping to initiate an immune response against smallpox. Jesty didn’t publicize his work, but physician Edward Jenner did, and Jenner usually gets the credit for developing the vaccine. The book features other historical medical revolutionaries like English obstetrician James Blundell, responsible for developing successful blood transfusion techniques that turned the formerly stigmatized procedure into a lifesaving protocol for severe hemorrhagic cases. Other chapters applaud patients who inspired breakthrough technology like the cardiac defibrillator and early advancements in the identification of HIV and treatments for AIDS. In a section notably demonstrating his knack for compelling and factual prose, Tanchanco presents young mother Anne Miller, the first woman injected with penicillin in 1942 and subsequently cured of her recurring strep infection; it was “as though the drug banished a dark demon” and “every tissue, taxed to exhaustion from protracted sepsis, now craved nourishment.” Another fascinating chapter on disease-transmitting mosquitoes credits the death-defying courage demonstrated by a group of enterprising doctors and an Army Surgeon General who used the insect itself to help analyze and eradicate yellow fever and malaria in Cuba and near the Panama Canal. Many subjects of this book suffered horribly from their maladies, but their cases inspired a host of radical therapies, some of which remain efficacious today. Tanchanco tells their stories chronologically and in a smooth, clear style that’s impeccably researched but devoid of potentially off-putting clinical jargon. That approach makes this book ideal reading for anyone intrigued by medical innovations.

An informative retrospective of medical pioneers and their innovations.