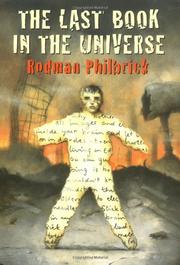 THE LAST BOOK IN THE UNIVERSE

In this riveting futuristic novel, Spaz, a teenage boy with epilepsy, makes a dangerous journey in the company of an old man and a young boy. The old man, Ryter, one of the few people remaining who can read and write, has dedicated his life to recording stories. Ryter feels a kinship with Spaz, who unlike his contemporaries has a strong memory; because of his epilepsy, Spaz cannot use the mind probes that deliver entertainment straight to the brain and rot it in the process. Nearly everyone around him uses probes to escape their life of ruin and poverty, the result of an earthquake that devastated the world decades earlier. Only the “proovs,” genetically improved people, have grass, trees, and blue skies in their aptly named Eden, inaccessible to the “normals” in the Urb. When Spaz sets out to reach his dying younger sister, he and his companions must cross three treacherous zones ruled by powerful bosses. Moving from one peril to the next, they survive only with help from a proov woman. Enriched by Ryter’s allusions to nearly lost literature and full of intriguing, invented slang, the skillful writing paints two pictures of what the world could look like in the future—the burned-out Urb and the pristine Eden—then shows the limits and strengths of each. Philbrick, author of Freak the Mighty (1993) has again created a compelling set of characters that engage the reader with their courage and kindness in a painful world that offers hope, if no happy endings. (Fiction. 10-14)