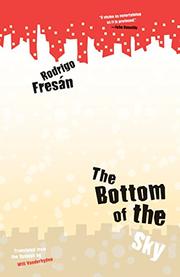 THE BOTTOM OF THE SKY

by Rodrigo Fresán ; translated by Will Vanderhyden

“If the past is a foreign country, then the future is a distant star”: lyrical, yearning novel by Argentinian writer Fresán (The Invented Part, 2017, etc.) of the search for better worlds, and better lives.

All stories, Vladimir Nabokov once observed, begin “Once upon a time.” Fresán agrees, calling that “simple magical line…the key that opens the lock of all the fairytales.” So it is that, once upon a time, two boys smitten by science fiction in the old-school mode of Asimov and Heinlein form a partnership of two, The Faraways, singularly devoted to traveling across time and space to, yes, the bottom of the sky—and returning to tell the tale. The worlds that they dream of are surely better than the monstrous one of reality, which, as they pile on years and experience, becomes ever less tenable; Isaac, one of the boys, allows that the reasons for their addiction to science fiction lie in the possibilities of escaping, in the case of his cousin Ezra, from “the family tradition amid rolls of fabric and mannequins” while, in his own case, “as far away from my past and my family’s past as possible.” Along the way they encounter a "strange girl," ethereally beautiful, who, it turns out, is muse and dream and storyteller and perhaps even alien all at once, invading the male clubhouse of science fiction to offer still greater visions of possible worlds—a thing to stop a floundering he-nerd in his tracks. As Fresán moves the point of view from one character to another, he evokes the golden age of science fiction, a theme that morphs into others: the salutary power of the imagination, the collapse of the world in a time of terror, the grace of friendship and love amid dreams of “a planet that will be ours and only ours.”

A beguiling, elusive, and altogether beautiful story that, like Fresán’s other recent work, imagines a world in which life and art are one.