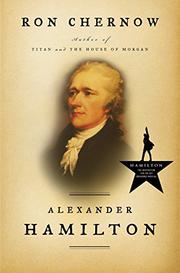 A splendid life of an enlightened reactionary and forgotten Founding Father.

“In all probability,” writes financial historian/biographer Chernow (Titan, 1998, etc.), “Alexander Hamilton is the foremost political figure in American history who never attained the presidency, yet he probably had a much deeper and lasting impact than many who did.” Indeed, we live in a Hamiltonian republic through and through, and not a Jeffersonian democracy. Many of the financial and tax systems that Hamilton proposed and put in place as the nation’s first treasury secretary are with us today, if in evolved form, as Chernow shows; and though Hamilton was derided in his time as being pro-British and even a secret monarchist, Chernow writes, he was second only to George Washington in political prominence, at least on the practical, day-to-day front. The author wisely acknowledges but does not dwell unduly on Washington’s quasi-paternal role in Hamilton’s life and fortunes; unlike many biographies that consider Hamilton only in Washington’s shadow, this one grants him a life of his own—and a stirring one at that, for Hamilton was both intensely cerebral and a man of action. He was, Chernow writes, a brilliant ancestor of the abolitionist cause; a native of the slave island of Nevis, he came to hate “the tyranny embodied by the planters and their authoritarian rule, while also fearing the potential uprisings of the disaffected slaves”—a dichotomy that influenced his views of ordinary politics. He was also constantly in opposition to things as they were, particularly where those things were Jeffersonian; as Chernow shows, Hamilton had early on been “an unusually tolerant man with enlightened views on slavery, Native Americans, and Jews,” but became a crusty conservative near the end of his brief life (1755–1804), perhaps as a result of one too many personal setbacks at the hands of the Jeffersonians.

Literate and full of engaging historical asides. By far the best of the many lives of Hamilton now in print, and a model of the biographer’s art.