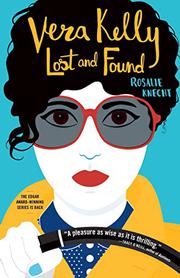 A former CIA agent–turned–private detective is forced to go undercover after her girlfriend is forcibly institutionalized.

The third installment in the series opens in 1971 with Vera Kelly adjusting to domestic bliss after Max, her bartender girlfriend, moves in with her in Brooklyn. Formerly a bit of a loner, Vera suddenly has a community. When Max gets a letter from her sister saying their parents are splitting up, she feels compelled to return to Los Angeles for the first time since she came out and her wealthy family refused to accept her sexuality, and she asks Vera to join her. When they arrive in Bel Air, a host of new characters greet them: Max’s stern father now has a much-younger fiancee, and there’s also a friend who lives on the property and has grand plans for spending the family fortune. When Vera wakes up one morning after Max had a fight with her father to find Max gone from the property, she panics, and then a message comes with the worst possible news: Max is in a hospital, which turns out to be a private sanatorium owned by her family. Vera goes undercover, admitting herself as a patient in hopes of rescuing Max, and she’s reminded of her own time in juvenile detention and her strained relationship with her mother. Knecht’s lively prose moves easily between Vera’s experiences with Max’s cold and homophobic family to her memories of being a teenager with a distant and unforgiving mother, effectively creating an atmosphere of danger and uncertainty as Vera and Max work to survive and reunite. Knecht has crafted an intriguing title character, and it's a pleasure to watch Vera allow herself to be devoted to a partner and to trust in the life they have built together.

An immersive encounter with a beloved character.