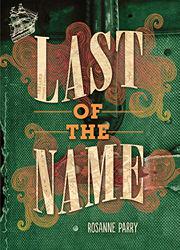 LAST OF THE NAME

Twelve-year-old Danny O’Carolan and his older sister, Kathleen, escape hunger and oppression in Ireland for the promise of a new life in America.

With the threat of starvation, disease, violence, and racism on every corner, life in 1863 New York City is scarcely better for two orphans trying to find their way in the world. Danny is tempted to join the Union Army, but Kathleen insists they stay together. Unfortunately, the only work available is that of a lady’s maid and a laundress. Danny gamely dons a dress in hopes of passing as a girl, but he lives for the mornings when he can escape into the city and be himself. There, he earns pennies for his dancing and singing and attracts the attention of a man who owns a theater. But he also learns that the Irish are hated not just for their faith, but because they are competing for low-wage jobs with the native-born population, including African-Americans, setting the stage for the unrest that caused the New York City draft riots. Familiar historical events are given new life through Danny’s wide-eyed optimism and Kathleen’s determination. And while the principals are Irish, their neighborhood boasts as diverse a population as modern Manhattan. An author’s note further explains the explosive events of 1863 as the population of New York City swelled with a wave of immigrants.

An exuberant dash through a pivotal year in American history.