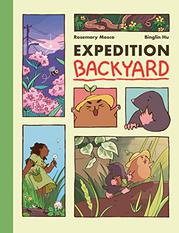 Exploring Nature From Country to City

Two animal friends learn about the great outdoors in the city and country and form the Adventurers Club.

Mole and Vole are opposites. Mole is tentative, cautious, and artistic; Vole craves danger and adventures. But while the duo’s friendship will feel familiar to readers of Elephant and Piggie and Frog and Toad, it’s not as well developed as those others, the dialogue often feels forced, and the true facts shared about animals encountered can feel didactic. In five chapters, the two share adventures near their country homes, inside a human home on a rainy day, and in the city after Vole’s curiosity lands the two in a moving box. Large panels in each chapter allow those new to graphic novels to follow along, and a final double-page spread in most summarizes the adventure in Mole’s sketchings. In between, an overhead view with a colored dotted line and multiple sightings of the adventurers, whose numbers swell to five club members, shows their route and the many things they spy. In the background is the subplot of a Black family’s move to the city and the initial loneliness and first friendship of their little girl. While body language and facial expressions are clear for most of the anthropomorphized animals, young children may have trouble with Vole; her heavy-lined eyebrows frequently make her look angry when she is meant to feel determined or excited.