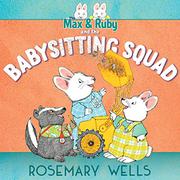 MAX & RUBY AND THE BABYSITTING SQUAD

From the Max and Ruby Adventure series

Ruby and her friend Louise have an idea. Branding themselves the Babysitting Squad, they decide to hire themselves out—informing Max, Ruby’s younger brother, that he is neither professional nor bonded and so cannot be part of it. Soon the girls are off to their first job, however, with Max riding along in his full-sized Saw-toothed Dirt Bucketer and somehow also towing his Rock Crusher. Telling Max to play outside, the girls have big plans, but their charge, Percy, would rather wear a skunk suit and spray people with aftershave and mouthwash than cooperate. However, when Percy gets a look at Max digging in the backyard, once more the underestimated little brother saves the day. Ruby and Max inhabit a world in which people book babysitters on long corded phones and elementary-age babysitters boast that they are “bonded” without explanation. Even readers who accept this may wonder why Max is going along on the job when he’s been told he can’t. Beginning with insufficient setup, the book ends with a thunk (Max just turns on a sprinkler) rather than an actual conclusion. It all prompts the obvious question: Is it time to retire the sibling duo that has brought us such joy over the years? (This book was reviewed digitally with 10-by-20-inch double-page spreads viewed at 30.3% of actual size.)

He may be just a toddler, but Max is getting a little old.