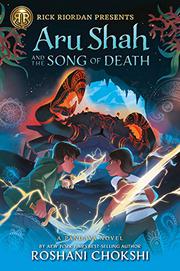 ARU SHAH AND THE SONG OF DEATH

From the Pandava Quintet series, volume 2

The second book in the Pandava Quartet begins with Aru Shah and her best friend, Mini, in an enchanted shopping center fending off zombies.

Someone has stolen the god of love’s enchanted bow and arrow, and they are using it to turn innocent humans into (literally) heartless, zombielike fighting machines. To make matters worse, Aru gets framed as the thief. The council of gods and Uloopi, the naga queen, give the two Pandavas an ultimatum: find and defeat the real thief in 10 days’ time or be exiled from the Otherworld forever. Aru and Mini unite with two other heroes—a new Pandava sister, Brynne Rao, and her best friend, Aiden Acharya—to save the world from mass destruction. On their numerous adventures in the Otherworld, from a giant-swan attack to their journey to the Ocean of Milk, Aru contemplates difficult questions about what it means to be good or evil, the role of duty, and the power of a good story. In this sequel to Aru Shah and the End of Time(2018), Chokshi seamlessly weaves Indian cosmology and pop culture into a refreshingly feminist plot laced with witty dialogue. The most compelling feature of the novel, however, is the complexity of its characters, who, despite their divinity or semidivinity, are at their core very human.

This will leave fans enthralled and clamoring for more.