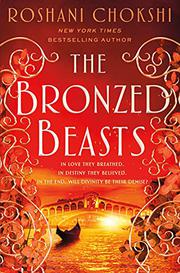 From the Gilded Wolves series, volume 3

Godhood is close at hand for Séverin and his crew in the epic conclusion to the Gilded Wolves trilogy.

Immediately following the devastating events of The Silvered Serpents(2020), Séverin, now separated from his friends, possesses the divine lyre. It’s a legendary instrument that, when played within the sacred temple beneath Poveglia, or Plague Island, could grant godly powers—and Séverin’s lineage renders him its sole player. Ruslan, the diabolical patriarch of the Fallen House, is the key to finding said temple, and Séverin must tread carefully if he wants to rescue Laila, Enrique, Zofia, and Hypnos, who have lost faith in him after his seeming betrayal at the Sleeping Palace in Russia. With a single clue, they traverse Venice to reunite with Séverin because Laila’s days are numbered and Séverin’s fantastical desires may hold her last chance at living. Chokshi crafts a final magnificent adventure infused with exhilarating perils and diverse mythologies, characters, and languages. While Séverin’s undying love for Laila and fear of losing his friends are at the forefront of this story, every character is beloved and worthy of praise, each possessing unique gifts, drives, and histories, although comedic-relief Hypnos deserves more opportunities to shine. There is no question that this is the end, and readers invested since the first installment will hold this last story close to their hearts.

An emotionally charged and passionate farewell to an invigorating fantasy series.