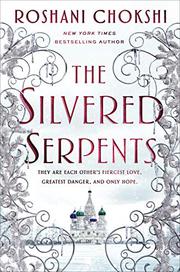 From the Gilded Wolves series, volume 2

Chokshi channels National Treasure vibes in her intriguing follow-up to The Gilded Wolves (2019).

Haunted by the death of his brother, Séverin determinedly searches for the artifact he is certain will absolve him of both his sins and his humanity—The Divine Lyrics, a book which is rumored to contain the secret to rebuilding the Tower of Babel, thus promising godhood and erasing pain, suffering, and guilt. Séverin hardens his heart and conceals his true intentions, both to guard himself and to ensure he accomplishes his mission for the friends whom he longs to protect. Séverin’s cruel front most hurts Laila, his mistress-for-show, and she, in turn, hides her deepest secret from him. Séverin, Laila, and the rest of their team—Zofia, Enrique, and Hypnos, patriarch of House Nyx—travel to a wintry Russia, where they are later joined by some unexpected cohorts, to explore the Sleeping Palace for The Divine Lyrics. This is a more cohesive and well-executed fantastical endeavor than its predecessor, allowing complex characterization to flourish—although the art of Forging, except for Laila’s ability to read objects with her hands, still seems vague. Themes, including visibility, grief, and sacrifice, permeate the story, driving it to breathtaking highs and heartbreaking lows. As before, the characters are richly diverse in ethnicity and sexual orientation; Zofia exhibits signs of being on the autism spectrum.

Lavish and thrilling—a reward for readers who have awaited its release.