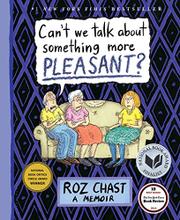 CAN'T WE TALK ABOUT SOMETHING MORE PLEASANT?

A revelatory and occasionally hilarious memoir by the New Yorker cartoonist on helping her parents through their old age.

Few graphic memoirs are as engaging and powerful as this or strike a more responsive chord. Chast (What I Hate, 2011, etc.) retains her signature style and wry tone throughout this long-form blend of text and drawings, but nothing she’s done previously hits home as hard as this account of her family life as the only child of parents who had never even dated anyone else and whose deep bond left little room for this intruder in their midst. Yet, “the reality was that at 95, their minds and bodies were falling apart,” and these two people who had only relied on each other were forced to rely on a host of caretakers, their daughter in particular, and to move from the Brooklyn apartment that had been home for half a century into a series of facilities that provided fewer and fewer amenities at escalating expense. Chast rarely lapses into sentimentality and can often be quite funny, as she depicts mortality as “The Moving Sidewalk of Life” (“Caution: Drop-Off Ahead”) or deals with dread and anxiety on the “Wheel of DOOM, surrounded by the ‘cautionary’ tales of my childhood.” The older her parents get, the more their health declines and the more expensive the care they require, the bleaker the story becomes—until, toward the end, a series of 12 largely wordless drawings of her mother’s final days represents the most intimate and emotionally devastating art that Chast has created. So many have faced (or will face) the situation that the author details, but no one could render it like she does.

A top-notch graphic memoir that adds a whole new dimension to readers’ appreciation of Chast and her work.