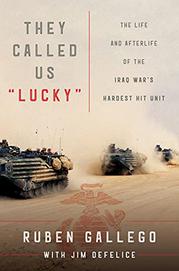 THEY CALLED US "LUCKY"

The Life and Afterlife of the Iraq War's Hardest Hit Unit

by Ruben Gallego with Jim DeFelice

A Marine-turned-politician recounts his time under fire in Iraq.

An ambitious but poor youngChicagoan, Gallego worked his way to a Harvard scholarship—and then, as he readily allows, partied hard enough to be asked to leave. Aimless, he joined the Marine Corps after 9/11 and was packed off to boot camp, where he tried to keep the Harvard connection quiet. His drill instructor found out and upbraided him: “Why the hell aren’t you an officer?...Are you stupid?” The author’s well-reasoned response in this agile memoir is to note that the division between Marine recruit and Harvard undergrad isn’t the political one of conservative versus liberal but instead a more abiding one of class and, to some extent, ethnicity. “Statistically,” writes Gallego, “you won’t find many young Latino males raised by single women in households with sketchy backgrounds getting college degrees, let alone from Harvard. The odds were far better that I’d be in prison, or even dead.” By the odd logic of the Marine Corps, Gallego was assigned to a reserve unit in New Mexico and sent to Iraq, where, for a time, his company was dubbed “Lucky Lima” for not having taken casualties. That luck soon ran out. Toward the end of Gallego's tour, Lima “had the dubious honor of being the hardest hit unit in the Marine Corps since the bombing at Beirut.” Gallego writes affectingly of his friendship with a young Navajo man who died there, one reason that, now a liberal Democrat and Arizona congressman, he takes an active legislative interest in Native American affairs. Condemning the Iraq misadventure as a political stunt—of a visiting Dick Cheney, he writes, “This asshole pushed us into a war that we didn’t need and then didn’t get us the armor that we did need”—the author notes that his training has helped put discipline in his life. It also saved others on Jan. 6, when he and fellow veterans helped their congressional colleagues escape the insurrectionary mob.

A deeply felt, swift-moving account of war and its complex aftermath.