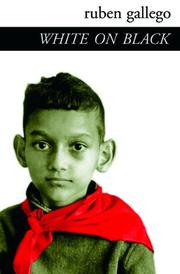 Short, sharp stunner of a memoir of a youth spent in a series of Russian children's homes.

Gallego, born with cerebral palsy, unable to stand on his own two feet, was abandoned by his parents and institutionalized by his grandfather, the secretary general of the Spanish Communist Party in the 1960s. The reader is shuttled from scene to scene of Gallego's childhood, much as the author was moved from place to place; it's a kaleidoscope of memories of kindness and hardship, companionship and towering loneliness. Gallego begins by explaining how he would get to the bathroom at night as a child (by throwing himself to the floor and crawling naked along the freezing hallway), but it rapidly becomes clear that this is no tear-jerker, and that Gallego doesn't want pity. While he does discuss the poor treatment he received at the hands of attendants, who complained endlessly about carrying him, so much so that at one point he resolved to stop eating, most of his fury is directed at the wider world and its blatant injustices. And always, there is the haunting fear of what would become of him when he reached adulthood; the usual practice was to deposit disabled teenagers in old-folks' homes and leave them to lie in their own filth until they died.