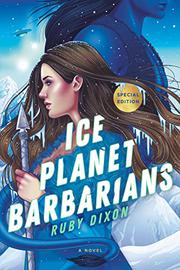 A woman stolen by aliens crash-lands on an ice planet and finds love.

Dixon’s wildly popular series—it’s a fan favorite on TikTok and has a podcast dedicated to deconstructing each episode—is finally coming to print. In this first installment of the series, Georgie and at least a dozen other 22-year-old women are stolen from their homes on Earth by green aliens. Something goes wrong, and the aliens abandon their human cargo on an icy planet the women dub Not-Hoth. After engineering an escape plan, Georgie becomes their de facto leader. She bundles up and trudges out to find help and meets Vektal, a 7-foot blue alien and the leader of his tribe, the Sakh. His people have developed a symbiotic relationship with an organism called the khui, which allows the Sakh to survive the brutally cold temperatures of their home planet. Vektal’s people mate for life, but since there are very few women left, he has resigned himself to life without a partner. When he sees Georgie and his khui resonates, a physical response akin to purring, he knows she is destined to be his mate. Explorations of coercion, consent, and free will are woven throughout the story. Vektal’s unorthodox greeting shows that consent might operate differently in his world; but in the end, he learns that humans trapped in the worst of circumstances will still fight to control their own destinies. The book is fast-paced and sexy, but the major appeal might be Vektal. He is a romance main character stripped down to the core: desperate to find his partner and willing to do anything to keep her happy.

The perfect blend of sweet, sexy romance and a riveting, high-stakes survival story.