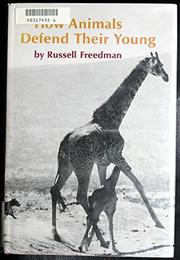 HOW ANIMALS DEFEND THEIR YOUNG

True, much of the material reshuffled here is already familiar from books on animal babies, individual animals, etc., and this is essentially a compilation of many examples of a few different methods of defending the young: hiding them (by establishing safe nurseries), emitting danger signals (pheromones, calls or cries, whatever), helping them escape (like some mammal mothers, the father stickleback fish will carry his young in his mouth), attacking (a last resort), etc. But Freedman enlivens the survey with particular, telling instances. an eight-year-old chimp died of grief after losing his mother, and other chimpanzees' adoption of younger, orphaned group members has been observed; and in Tanzania a mother rhinoceros was seen killing a lion to save her calf. And instead of mindlessly ticking off examples Freedman relates them to considerations of whys and wherefores. Pointing out that the mother bird's protective behavior is "instinctive and automatic," he notes that "a robin will instinctively spread her wings to shade an empty nest from the sun while chicks outside the nest are dying of heat and starvation"; and in the chapter on bluffs and tricks he asks "Is it possible for a bird to pretend?" and notes that the behavior once known as injury feigning or the broken wing ruse is now called distraction display to "emphasize the effect of the behavior rather than speculating on the intent of the bird." And he ends with the timely reminder that human destructiveness makes all such defense inadequate. Animal protection now "lies in our hands.