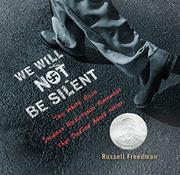 WE WILL NOT BE SILENT

In the heart of Germany, a student resistance movement called the White Rose took a courageous stand to denounce the Nazis.

“They could have chosen to throw bombs,” but the young members of the White Rose chose to oppose Nazi Germany with printed words. The clandestine student activists, including Hans and Sophie Scholl and Christoph Probst, wrote leaflets decrying Nazi atrocities, urging German citizens to resist the Nazi government, and denouncing the Nazi “dictatorship of evil.” Cranking out thousands of mimeographed leaflets at night in a secret cellar, the students proclaimed to Nazi leaders, “We are your bad conscience,” imperiling their lives. Among the wealth of good Holocaust literature available, Freedman’s volume stands out for its focus and concision, effectively placing the White Rose in its historical context, telling the story of Nazi Germany without losing the focus on the White Rose, and doing so in just over 100 pages. Archival photographs are effectively integrated into the text, and the typeface at times resembles the typewriter’s text on mimeographed leaflets, a nice design choice. The selected bibliography includes volumes for young readers and the superb German-language film Sophie Scholl: The Final Days (2005).

A thorough and accessible introduction to the Holocaust and the students who dared to take a stand against evil.