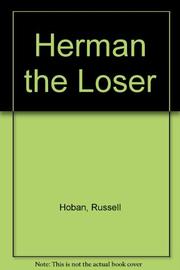 Herman loses everything, boots, sweaters, mittens, toys, even the watch father gave him. But as Herman, his father and sister Sophie retrace their footsteps, Herman is distracted by countless objects on the road, one of which leads him to the missing watch. Despite his son's failing, father is quite proud of him. "Herman is a finder" — and father lists all the things Herman picked up on their walk. Other little losers will identify with Herman's troubles though they may find their attention wandering on the long hike toward the missing watch.