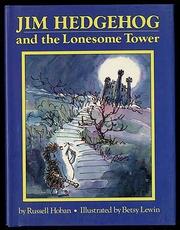 JIM HEDGEHOG AND THE LONESOME TOWER

Plump little Jim "liked his music loud and he liked it heavy," but he doesn't know how to read music—an inconvenient fact discovered by his mother after Mr. Strange (a stoat) sells them a recorder cheap. Mom gives Jim a succinct lesson in "do re mi" and the staff's lines and spaces ("Fat Alligators Cautiously Eat Grapefruit") despite Jim's punning parries; then the recorder leads Jim to an inn where he gets word of a noisy music-maker in a nearby tower, a fearsome place where he finds "Itsa Thing," a blond singer hung about with chains, lamenting a lost song she didn't know how to write down—a skill Jim can now share. All this is a curious descendant of Hoban's cozily endearing Frances stories. The little badger's songs were surprisingly similar to the lyrics recorded here; and where Frances embodied everyday friendly conflicts, Jim's fixation on heavy metal sometimes seems almost as universal. The story is less earthshaking than the music described, but Hoban is still a master of satirical legerdemain; his wordplay and cleverly interwoven innuendos make a magical music of their own. Lewin's winsome, freely limned hedgehogs are as comical—and nearly as deft—as the drawings of Hoban's sometime British illustrator, Quentin Blake. Far-out, but funny, truly original, and sure to appeal to the right audience. (Fiction. 7-10)