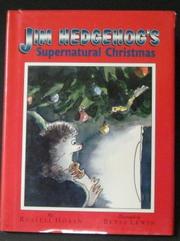 Plump little Jim, who debuted in Jim Hedgehog and the Lonesome Tower (p. 256), has another cautionary adventure with popular culture. This time, his habit of ingesting huge quantities of food while watching TV ends after the title character of his favorite film, The Revolting Blob, bursts from the screen to trade places with him. Trapped in the TV, in a sewer where he has retreated from pursuers, Jim can't get out until he slims down enough to make it through a narrow passage, a task accomplished by literally battling legions of food. Home at last, he's ready to give up snacking—and TV, too—for jogging. With broader humor and a less convoluted story than its predecessor, an entertaining yarn that should have wide appeal. Lewin's illustrations, skillfully drawn and attractively colored, make a charmingly imaginative complement. (Fiction. 6-10)