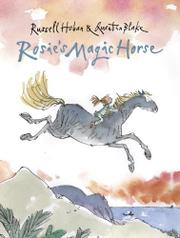 A little girl finds a discarded ice-pop stick, triggering a surprising adventure in this rib-tickling fantasy.

When Rosie discovers a used ice-pop stick, she automatically adds it to the cigar box housing her collection of other ice-pop sticks. The other sticks whine they are “nothing” without their frozen confections, but the sassy new stick boldly asserts he could be something, “maybe a horse.” At bedtime, Rosie wishes for a treasure chest to help her parents pay their bills while her fingers arrange the sticks into a horse shape. Midnight arrives, and Rosie awakens when a horse named “Stickerino” gallops out of the cigar box, promising to take her where there’s treasure. Rosie and Stickerino fly over cities, jungles, oceans and deserts until they arrive at an ice-pop mountain, where Stickerino “stickles” some pirate toughs while Rosie grabs a treasure chest. Next morning, Rosie presents her amazed father with a chest of gold while the sticks recover from their adventure. Blake’s sprightly, quirky signature ink-and-watercolor illustrations vibrate with playfulness and humor as they transport Rosie and Stickerino from their mundane urban world across color-washed pages to a rainbow-hued ice-pop mountain populated with rascally pirates, hilariously tickled into submission by empowered ice-pop sticks.

It’s an exuberant reminder to dream big, although, sadly, Hoban’s text has been Americanized, losing some of its flavor.