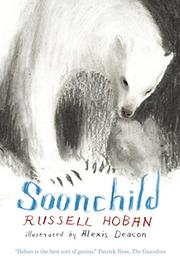 Beloved for such classics as Bedtime for Frances and The Mouse and His Child, the late master leaves a mystical tale about life, death and expiation of mistakes wrapped up as a romanticized Inuit fable.

A pre-story note sets the geography as “The North in my mind.” It provides references for fauna, snowmobiles and cold weather, but not for Inuit people; if Hoban researched Inuit culture beyond “my mind,” he doesn’t say. The story addresses distinctly non-Inuit readers: “Maybe…there isn’t any north where you are. Maybe it’s warm….There aren’t any Inuit or dogsleds, nothing like that.” In that Otherized “North” lives Sixteen-Face John, a shaman. As John indulges in “drinking Coca-Cola…watching TV…and reading magazines with centerfolds” and hunting “with a skidoo instead of a dogsled,” the text indulges in a problematic stereotype: native culture choked by excessive modernism and individual decadence. Soonchild, the unborn baby of John and his wife, No Problem, refuses to be born until she hears the World Songs, which contain “the memory of ancient rains that filled the oceans.” John mixes a Big-Dream Brew and goes on a dream-quest. He meets animals and spirits including Old Man Raven; he changes form and confronts demons; he retrieves the Songs. Deacon’s soft, primitive pencil and charcoal reinforce the drama. Hoban sneaks poetry into prose: “They taught him dreams and trances, magic songs and dances.”

A lyrically beautiful existential fable, unfortunately based on paternalistic and romanticized notions about Native peoples.