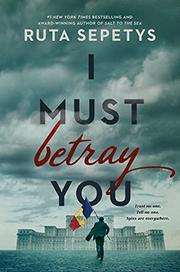 I MUST BETRAY YOU

A rare look at the youth-led rebellion that toppled Romania’s Ceaușescu.

Seventeen-year-old Cristian Florescu, with his spiky hair, love of poetry and English, and crush on Liliana Pavel, is as much of a rebel as it’s possible to be in Bucharest, Romania, in 1989. Communist dictator Nicolae Ceaușescu has been in power for 24 years, and most Romanians live in poverty, exporting what they produce to unknowingly fund Ceaușescu’s obscenely extravagant lifestyle. Wild dogs attack children in the streets, and secret agents are everywhere. When an agent confronts Cristian with evidence of treason—a single dollar bill tucked inside his notebook—and also offers medicine for Bunu, his sick grandfather, Cristian agrees to spy on the American diplomat family whose son he’s become friendly with. But as young Romanians gradually become aware that other countries have gained freedom from communism, they rise up in an unconquerable wave. Sepetys brilliantly blends a staggering amount of research with heart, craft, and insight in a way very few writers can. Told from Cristian’s point of view, intercut by secret police memos and Cristian’s own poetry, the novel crackles with energy; Cristian and his friends join the groundswell of young Romanians, combining pragmatism, subterfuge, hope, and daring. While the story ends with joy on Christmas Day, the epilogue recounts the betrayals and losses that follow. The last line will leave readers gasping.