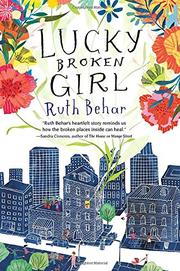 In the 1960s, Ruthie Mizrahi, a young Jewish Cuban immigrant to New York City, spends nearly a year observing her family and friends from her bed.

Before the accident, Ruthie’s chief goals are to graduate out of the “dumb class” for remedial students, to convince her parents to buy her go-go boots, and to play hopscotch with other kids in her Queens apartment building. But after Papi’s Oldsmobile is involved in a fatal multicar collision, Ruthie’s leg is severely broken. The doctor opts to immobilize both legs in a body cast that covers Ruthie from chest to toes. Bedridden and lonely, Ruthie knows she’s “lucky” to be alive, but she’s also “broken.” She begins collecting stories from her Jewban grandparents; her fellow young immigrant friends, Belgian Danielle and Indian Ramu; her “flower power” tutor, Joy; and her vibrant Mexican neighbor, Chicho, an artist who teaches her about Frida Kahlo. Ruthie also prays and writes letters to God, Shiva, and Kahlo, asking them for guidance, healing, and forgiveness. A cultural anthropologist and poet, the author based the book on her own childhood experiences, so it’s unsurprising that Ruthie’s story rings true. The language is lyrical and rich, the intersectionality—ethnicity, religion, class, gender—insightful, and the story remarkably engaging, even though it takes place primarily in the island of Ruthie’s bedroom.

A poignant and relevant retelling of a child immigrant’s struggle to recover from an accident and feel at home in America.