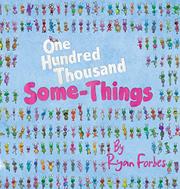 “Some-Things are tiny, but you can see them if you look closely,” the story begins, filling the entire page with this single sentence in bubble letters of varying sizes. Several Some-Things live inside Sebastian’s house (only just visible in their bright colors, hiding inside the vent), and they invite every Some-Thing they know to come to a party. The multihued, multitextured creatures soon fill Sebastian’s room, much to Sebastian’s dismay. After two clever, almost-rhyming two-page spreads of the different types and shapes of Some-Things Sebastian encounters, the boy demands they leave his room. But—they protest—not without cake! Although there seems to be a Some-Thing for everything, not a one of them knows how to bake a cake, so they turn to their resident magician, who turns the entire house into a cake. After the Some-Things and all the human neighbors help to eat the house, the Some-Things helpfully build a new, grows-with-water home for Sebastian’s family, leading to one last visual joke in the endpapers. Forbes has designed the book so that the words themselves become part of the pictures, and the collage-textured illustrations, reminiscent of the Pinkalicious series, will have readers giggling. Sebastian’s misadventures are sure to tickle funny bones, and young readers will be looking at their bedroom vents for their own Some-Things.