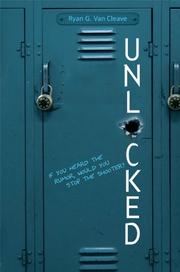 School violence revisited. In Todd Strasser’s Give a Boy a Gun (2000), the school-violence story was raw and powerful. Ron Koertge’s verse treatment, The Brimstone Journals (2001), kept the story innovative and fresh. Over 10 years later, Van Cleave’s debut novel in verse is a didactic rehashing with uninspiring poetry. Andy has already been bullied for the last six years, but his situation grows worse when he starts his freshman year at the same high school where his father works as a janitor. Noticing other losers, like “equal / opportunity / angry” Sue and bookworm Nicholas, the teen turns his attention to Blake, who has undergone a metamorphosis since losing his soldier dad in the Iraqi war. As rumors about STDs, alcohol and sexual orientation travel the corridors, nothing garners as much attention as the rumor that Blake is hiding a gun in his locker. To win favor with his crush, Becky Ann, Andy steals his father’s keys to open Blake’s locker and retrieve the gun. While he doesn’t find anything suspicious in the locker, he discovers that Blake does have a firearm and final plans for his classmates. At first, Andy’s knowledge and newfound friendship with Blake gives him “rebel courage,” but soon he realizes that he has a difficult decision to make as Blake’s date for destruction approaches. A concluding teacher’s guide confirms the intended use of this tired-feeling novel. (Fiction. 12-16)