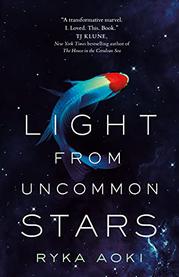 A runaway trans girl, a harvester of souls for hell, and a family of refugee alien doughnut makers collide in unexpected and wondrous ways.

Katrina Nguyen is on the run. She’s escaped her violent father and come to crash in Los Angeles with a queer friend, except now that she’s actually here, he’s not exactly as welcoming as she'd hoped. But she’s got her laptop, her hormones, and her violin—everything she needs for now. Shizuka Satomi is looking for her next student. The world knows her as a legendary violin teacher, sometimes called the Queen of Hell. What no one knows is that she’s had 49 years to actually deliver seven souls to hell. Now her time is almost up, and she wants her last soul to be someone special. Lan Tran and her family run Starrgate Donut, but they too have a secret: Their doughnuts are replicated, not baked, and they are alien refugees from a galactic war. Used to rejection and hatred, Katrina can’t bring herself to trust the offer of private violin lessons from a striking stranger. But as her life gradually begins to intertwine with the lives of Shizuka, Lan, and other colorful, well-drawn characters, everyone receives unexpected gifts of tenderness. Musicians selling their souls to hell shouldn’t fit in the same story as alien doughnut makers building a stargate, but somehow all these elements combine to create something wild and beautiful.

Filled with mouthwatering descriptions of food and heart-swelling meditations on music, this novel is an unexpected gift.