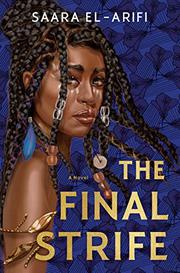 In the first of a trilogy, three women disturb the social order of a rigidly caste-based society poised on the brink of disaster.

The red-blooded Embers command, the blue-blooded Dusters work, and the transparent-blooded, mutilated Ghostings serve. Sylah is a secret Ember, stolen as a toddler by the rebellious Duster sect known as the Sandstorm, who left a Duster in her place and raised her to revolution. Soldiers slaughtered the Sandstorm, and Sylah has spent the past several years as an aimless drug addict and fighter in an underground betting ring. A fellow Sandstorm survivor reenters her life and encourages her to enter the Aktibar, the fierce competition to become an heir to the empire’s ruling wardens. Due to some poor choices, Sylah ends up training another competitor instead: Anoor, a young woman everyone believes to be the Warden of Strength’s daughter when in fact she is one of the Duster children left by the Sandstorm. As Anoor advances in the Aktibar, Sylah must decide whether to rejoin the new Sandstorm or follow a different path to rebellion. Meanwhile, Hassa, a trans woman Ghosting who’s a friend of Sylah’s, seeks freedom for her people, all the while hiding secrets which strike at the Empire’s very foundations. The concept of people having different blood colors seems implausible and basing prejudice on it, ridiculous; but then, this is the same genre in which enormous dragons fly and breathe fire in sheer defiance of physics, appearing in stories written by authors from a world that foolishly constructs prejudice around skin color. Racism based on blood color also leads to some interesting possibilities for “passing,” which the author exploits to their fullest extent. The message is hardly subtle, but our current climate does not support much subtlety, and this blunt allegory—which also draws from Ghanaian and Arabian tales—is crafted into a compelling story with sympathetic characters. The depictions of Anoor, overcoming both the naïveté of a woman brought up in a pampered bubble and the bruised self-esteem of an abuse victim, and of Sylah, battling confused loyalties and a devastating addiction, are particularly well done.

Timely themes and a gripping narrative draw the reader in and keep them there.