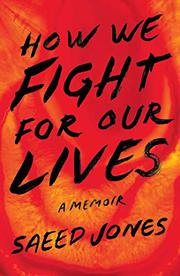 HOW WE FIGHT FOR OUR LIVES

A coming-of-age memoir marks the emergence of a major literary voice.

A prizewinning poet, Jones (Prelude to Bruise, 2014) tends less toward flights of poetic fancy and more toward understated, matter-of-fact prose, all the more powerful because the style never distracts from the weight of the story: the sexual awakening and struggle for identity of a young black man raised in Texas by a single mother, a Buddhist, who herself was the daughter of an evangelical Christian. He and his mother were both damned to hell, according to his grandmother, who nonetheless loved both of them. There is a lot of subtlety in these familial relations: the son not willing to recognize the implications of his loving mother’s heart condition, the mother struggling with her son’s sexuality. The “fight” in the title is partly about the fight with society at large, but it is mainly about the fight within the author himself. “I made myself a promise,” he writes. “Even if it meant becoming a stranger to my loved ones, even if it meant keeping secrets, I would have a life of my own.” Jones documents the price he paid for those secrets, including the shame that accompanied his discoveries of self and sexuality. “Standing in front of the mirror,” he writes, “my reflection and I were like rival animals, just moments away from tearing each other limb from limb.” One of them was the loving son and accomplished student; the other, a young man drawn toward denigrating and debilitating sexual encounters, devoid of love, with white men who objectified him as black and even with straight men. One almost killed him and made him feel like this is what he deserved. “This is that I thought it meant to be a man fighting for his life,” writes Jones. “If America was going to hate me for being black and gay, then I might as well make a weapon out of myself.”

A memoir of coming to terms that’s written with masterful control of both style and material.