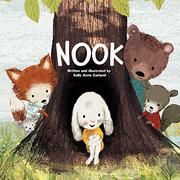 A shy child surrenders her special sitting place when an unhappy stranger comes along.

Resembling the sweet, flop-eared white bunny of Garland’s Share (2014) more in looks than character, Nook much prefers to sit silently apart pressed safely against a wall, beneath a table, or, best of all, nestled in a cozy hollow in an old elm tree outdoors; she’ll join the play of her more outgoing animal friends in spirit rather than body. Mostly they give her the space she needs, inviting her to join them just often enough to let her know she’s included. Disaster looms one day, though, when she finds a big, angry badger sitting in her special place: “Mine!” it snaps. “Go away!” With no wall or corner to retreat to, Nook feels her panic rising—and suddenly her friends are all gathered behind her. “That’s Nook’s place.” “Yes, Nook needs to sit there.” When the interloper won’t be moved, Nook’s friends lead her away to be with them in the middle of the playground…and that turns out to be OK, because now that she understands that they will always have her back she no longer needs the refuge. Garland uses vigorous strokes of brush and colored pencil to give her figures a plushy surface, and though she depicts them as animals, so human are their understated expressions and gestures (and clothes) that young readers may not notice. Both Nook’s gentle nature and the kindness and loyalty of her friends positively shine.

A sensitive character study with feelings that run deep.