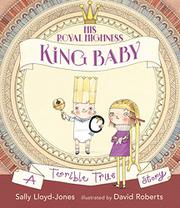 A big sister’s nose is out of joint when her baby brother arrives and makes a royal mess of what she regarded as her once-ideal life.

First-person text establishes “the most beautifulest, cleverest, ever-so-kindest Princess with long, flowing wondrous hair” as the narrator of this new-baby story. Illustrations amplify the flowery text’s humor by depicting the white girl with bobbed hair and wearing a pair of yellow tights on her head to emulate Rapunzel-like locks. After King Baby, who is also white though initially hairless, arrives, parallel series of panel illustrations, one rendered in the cartoon style of the main book, the other in a naïve style that suggests a child’s hand, detail the ways that the baby disrupts her happy life with his pooping, burping, attention-hogging ways. The worst arrives with his first birthday, which she decides to interrupt “disguised as a Mysterious Fairy, with a magic wand, a big very magical nose, and a cunning plan….” But before she can put her plan into action, the baby is overwhelmed by the party guests’ singing and attention and begins to cry. Who can soothe him? Only his big sister, of course. She’s now a “Kind Fairy [whose] loveliness had grown even stronger (like a sparkling mountain stream).” And, yes, following this act of sisterly kindness, “They Lived Happily Ever After—THE END….”

A royal serving of fun for the new-baby shelf.