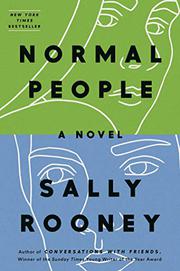 Irish writer Rooney has made a trans-Atlantic splash since publishing her first novel, Conversations With Friends, in 2017. Her second has already won the Costa Novel Award, among other honors, since it was published in Ireland and Britain last year. In outline it's a simple story, but Rooney tells it with bravura intelligence, wit, and delicacy. Connell Waldron and Marianne Sheridan are classmates in the small Irish town of Carricklea, where his mother works for her family as a cleaner. It's 2011, after the financial crisis, which hovers around the edges of the book like a ghost. Connell is popular in school, good at soccer, and nice; Marianne is strange and friendless. They're the smartest kids in their class, and they forge an intimacy when Connell picks his mother up from Marianne's house. Soon they're having sex, but Connell doesn't want anyone to know and Marianne doesn't mind; either she really doesn't care, or it's all she thinks she deserves. Or both. Though one time when she's forced into a social situation with some of their classmates, she briefly fantasizes about what would happen if she revealed their connection: "How much terrifying and bewildering status would accrue to her in this one moment, how destabilising it would be, how destructive." When they both move to Dublin for Trinity College, their positions are swapped: Marianne now seems electric and in-demand while Connell feels adrift in this unfamiliar environment. Rooney's genius lies in her ability to track her characters' subtle shifts in power, both within themselves and in relation to each other, and the ways they do and don't know each other; they both feel most like themselves when they're together, but they still have disastrous failures of communication. "Sorry about last night," Marianne says to Connell in February 2012. Then Rooney elaborates: "She tries to pronounce this in a way that communicates several things: apology, painful embarrassment, some additional pained embarrassment that serves to ironise and dilute the painful kind, a sense that she knows she will be forgiven or is already, a desire not to 'make a big deal.' " Then: "Forget about it, he says." Rooney precisely articulates everything that's going on below the surface; there's humor and insight here as well as the pleasure of getting to know two prickly, complicated people as they try to figure out who they are and who they want to become.