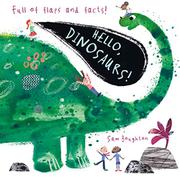 From the Animal Facts and Flaps series

Kid-friendly and more informative than most dino books for tots, this lift-the-flap dinosaur book is a great next step for any kid with an interest in the subject. Each double-page panorama—occasionally folding out to three or even four pages wide—is organized around types of dinosaurs or habitats. While most featured dinosaurs are land dwellers, prehistoric reptiles of the sea and sky appear as well. Dinosaurs are rendered in bright colors on a white background in a childlike style that makes even Tyrannosaurus rex not too terrifying. Make no mistake, though; the king of the dinosaurs is clearly labeled “CARNIVORE.” Folding T. rex’s head back reveals a black-and-white handsaw, to which the text likens its enormous, sharp teeth. Another marginal illustration, captioned, “Watch out! T. rex is looking for its lunch,” shows a Triceratops specimen on a plate. Yet another reads, “Crushed dinosaur bones have been found in T. rex poop!” Several racially diverse kids appear in each scene, like toddler scientists variously observing, inspecting, and riding on the dinosaurs depicted. In addition to teaching the difference between herbivores and carnivores, the book also conveys a sense of the scale of these prehistoric beasts: Diplodocus is two school buses long, a Triceratops adult is the size of an elephant, and a Velociraptor is the size of a turkey, for example.

Sure to appeal to budding paleontologists everywhere.