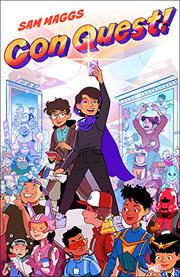 Siblings compete in a scavenger hunt at a comics convention.

Twelve-year-old twins Cat and Alex Gallo have been attending GeekiCon their whole lives with their comic-creator parents. This time, they’re determined to win a scavenger hunt organized by the dreamboat star of the hit TV series Paranormal. Fan Cat hopes to spend time with the actor, and artist Alex aims for a TV crew mentorship. Their strictly conventional 14-year-old sister, Fi, has been charged with babysitting them, hoping to prove she’s responsible enough for a camping trip with the cool crowd. Chapters alternate among the three siblings as the twins escape Fi to compete in the challenge. Fi isn’t the only one after the twins—James M., a white, sexist con staffer who scorns “fangirls and fake geeks,” wants them kicked out for participating in the hunt, which has not been endorsed by GeekiCon. The book’s an absolute love letter to con culture, focusing on camaraderie and confidence. Instead of citing real-world pop culture, pseudonymous stand-ins (Whom, M.D.!) turn the text into a scavenger hunt of in-jokes for geeks. The actual scavenger items are challenging and entertaining, as is the resulting conflict between Alex and Cat, despite their strong relationship. The siblings are white, with a Slovakian-immigrant mother; Alex is autistic, developed with nuance and depth. Positive representation’s given to a Filipinx character and to an adorably age-appropriate girl-girl relationship.

The next best thing to actually attending a con.