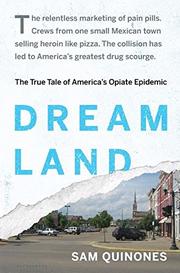 Veteran freelance journalist Quinones (Antonio’s Gun and Delfino’s Dream: True Tales of Mexican Migration, 2007, etc.) cogently captures the essence of the festering war on drugs throughout the 1990s. He focuses on the market for black tar heroin, a cheap, potent, semiprocessed drug smuggled into the United States from Nayarit, a state on the Pacific coast of Mexico. The author charts its dissemination throughout American heartland cities like Columbus and Portsmouth, Ohio, home to a huge, family-friendly swimming pool named Dreamland, which closed in 1993, after which opiates “made easy work of a landscape stripped of any communal girding.” Assembling history through varying locales and personal portraits, Quinones follows a palpable trail of heartbreak, misery and the eventual demise of seemingly harmless people “shape-shifted into lying, thieving slaves to an unseen molecule.” The author provides an insider’s glimpse into the drug trade machine, examining the evolution of medical narcotic destigmatization, the OxyContin-heroin correlation and the machinations of manipulative pharmaceutical companies. His profiles include a West Virginia father burying his overdosed son, a diabolically resourceful drug dealer dubbed “the Man,” and “Enrique,” a Mexican citizen who entered the drug trade as a dealer for his uncle at 14. Perhaps most intriguing is the author’s vivid dissection of the “cross-cultural heroin deal,” consisting of an interconnected, hive-minded “retail system” of telephone operators, dealers (popularly known as the “Xalisco Boys”) and customers; everything is efficiently and covertly marketed “like a pizza delivery service” and franchised nationwide with precision. The author’s text, the result of a five-year endeavor of remote research and in-person interviews, offers a sweeping vantage point of the nation’s ever expanding drug problem. Though initially disjointed, these frustrating and undeniably disheartening scenarios eventually dovetail into a disturbing tapestry of abuse, addiction and death. Thankfully, for a fortunate few, rebirth is possible.