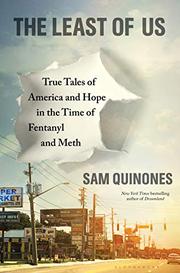 THE LEAST OF US

Quinones sounds an alarm about a rapidly spreading form of meth in a follow-up to his award-winning Dreamland.

Buried in this overstuffed book lies an urgent story the author sees as overshadowed by the opioid crisis: the explosive growth of the potentially lethal form of synthetic methamphetamine known as P2P (phenyl-2-propanone). Through extensive but rambling interviews with people ranging from dealers to Drug Enforcement Administration agents, Quinones found that unlike earlier types of meth, made with hard-to-get ephedrine, P2P meth could be more easily made from “legal, cheap, and toxic” chemicals in Mexican labs and shipped north by traffickers. P2P, he learned, could cause intense paranoia and terrifying hallucinations and faster and worse harm than ephedrine-based forms: The new meth “was quickly, intensely damaging people’s brains.” Quinones maps the wreckage nationwide, including that it drew Black dealers to what had been “a working-class white drug.” What he learned is genuinely alarming but embedded in background material on topics that have been extensively covered elsewhere: the neuroscience behind addiction, the pre–P2P shifts from prescription painkillers to heroin to fentanyl, the toll opioids have taken in West Virginia, and the Sackler family’s disastrous stewardship of Purdue Pharma. The author also describes effective community-based responses to the crisis, such as church shelters for homeless addicts and “drug courts” that offer substance abusers an alternative to prison. Quinones concludes that the nation has forsaken “what has made America great” and that “when drug traffickers act like corporations and corporations like drug traffickers, our best defense, perhaps our only defense, lies in bolstering community.” After his account of the corporate missteps of the Sacklers and others, readers may be unpersuaded that the “best defense” might come from hard-hit communities themselves rather than from remedies such as tighter government regulation of rapacious corporations like Purdue Pharma.

A valuable but overlong overview of an underappreciated drug crisis.