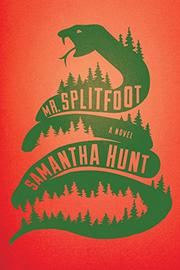 In Hunt’s surreal third novel (The Invention of Everything Else, 2008, etc.), 17-year-olds Nat and Ruth cleave to each other at The Love of Christ! Foster Home, Farm, and Mission in upstate New York. Nat’s “ability” to talk to the dead catches the attention of Mr. Bell, a con man, who convinces them to take their show on the road. A strange man offers to buy Ruth from her fanatical foster father, but Ruth gets Mr. Bell to marry her instead, creating a series of fraught and unsettling triangular relationships. Fourteen years later, Cora, Ruth’s heavily pregnant niece, stumbles through woods and along highways, following her now mute and enigmatic aunt without understanding why. Wry, absurd, and occasionally silly humor punctures the weighty themes of motherhood, aging, and loss. “We’re the Society for Confusing Literature and the Real Lies,” a woman explains to Cora at an event on the Erie Canal in which Captain Ahab and Huck Finn compete with Lord Nelson and a German U-boat. Apparent non sequiturs pepper the dialogue throughout, and while at first they give the story a stilted quality, the seemingly random details soon stitch together into a larger meaning. Cora’s pregnancy is a natural metaphor for bridging the tiny with the universal, and the novel is rife with chewy metaphors and similes that require careful parsing. At times, the novel’s murky obscurity may be vexing—a passage featuring a tight-lipped runaway nun is particularly gnomic—but the drip of information and layers of potent imagery keep the pages turning.

A truly fantastic novel in which the blurring of natural and supernatural creates a stirring, visceral conclusion.