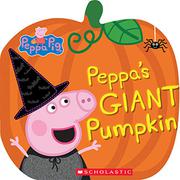 From the Peppa Pig series

by Samantha Lizzio ; illustrated by eOne

Peppa hopes to join her classmates in a Halloween pumpkin competition in this adaptation of a story from the popular British television program Peppa Pig.

With the help of Granny and Grandpa Pig, Peppa turns her giant pumpkin, which is the size of a compact car, into a jack-o’-lantern. The trio is flummoxed when it comes time to transport the pumpkin to the competition, so they call on Miss Rabbit and her helicopter to airlift the pumpkin to the festivities as Peppa and her grandparents ride inside. Peppa arrives just in time for the contest and wins the prize for best flying pumpkin. The scenes look as if they are pulled directly from the television show, right down to the rectangular framing of some of the scenes. While the story is literally nothing new, the text is serviceable, describing the action in two to three sentences per page. The pumpkin-shaped book and orange foil cover will likely attract youngsters, whether they are Peppa fans or not.

This TV rerun in board-book form has nothing new to offer.