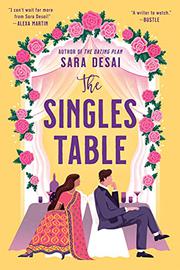 A fun-loving lawyer promises to play matchmaker for a surly (but smoking-hot) businessman.

It’s wedding season, and Zara Patel is getting used to her seat at the singles table. Although her aunties are always trying to set her up with eligible bachelors, she’d rather focus on her own successful matchmaking efforts. Helping other people find their happily-ever-afters is a lot easier than attempting a relationship herself, especially since Zara thinks she’s “too much” for most men. Fellow singles table resident Jay Dayal, an Air Force veteran and current security company owner, immediately knows that Zara isn’t the woman for him (not that he’s even looking for a woman). She’s loud, impulsive, and so klutzy she often ends up in the ER. However, neither of them can deny the sparks that fly between them when they meet during a bachelor/bachelorette party paintball game and Zara shoots him in the butt. When Jay’s mother begs him to find a partner, Zara agrees to use her matchmaking skills to set him up with someone if he promises to use his business to help her struggling law firm find clients. As they spend more time together, though, their chemistry becomes impossible to ignore, and their deal turns into a no-strings-attached relationship. But between Zara’s reluctance to fall in love and Jay’s inability to open up, things are more complicated than they expected. Can they let their walls down and see that the perfect match might be right in front of them? Desai creates a romantic comedy that has both genuine laugh-out-loud moments (usually because of Zara’s antics) and quieter, more emotional scenes (including Jay’s struggle to tell Zara about his combat-related PTSD and Zara’s deep wounds from her parents’ acrimonious divorce).  Zara and Jay both feel like real people with believable flaws, and their relationship plays out in a way that feels earned, with plenty of steamy moments along the journey.