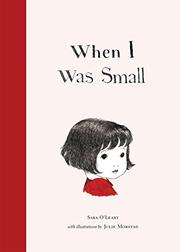 WHEN I WAS SMALL

From the Henry Books series

The third of the Henry books (When You Were Small, 2006; Where You Came From, 2008) continues the adorable journey but doesn’t veer from the path.

Henry wants to know about when his mother was small. She responds by telling him her name was Dorothea, but “because the name was too big for me, everyone called me Dot.” The picture on the facing page shows a class of really cute children inked in black and white, an equally cute teacher and Henry’s doll-sized mom in bright red. She went swimming in the birdbath, could “feast on a single raspberry” and wore a daisy for a sunhat. The text for each spread floats on a pure white page, and on the opposite page Morstad’s beautiful, clear drawings characterized by the spot use of color float on the same white space. The endpapers are full of similarly fanciful images of tiny Dot standing under a toadstool, leaping over a daisy or sporting butterflies as headgear. “In stories we can be small together,” his mother says, ending this quiet mother-and-son idyll.